The combination of a title like Kinky Killers and this movie’s DVD cover lulled me into a false sense of security so far as the levels of promised b-grade fun were concerned. It suffers from numerous problems in its execution, not least of which is the fact that the killer is neither the primary focus of the film, nor does he do anything particularly kinky. Other issues include the director’s ‘all over the place’ approach to making the movie, entire scenes where nothing makes sense and entirely different scenes that add nothing to the plot. This is not one of those movies that I would recommend to the truly hardened b-movie fan only; I wouldn’t recommend this movie to anyone. It’s not fun at all, just 85 minutes of non-stop randomness and the occasional display of oddly shaped breasts.

How to even try and explain this movie…  Well, the general idea is that a number of blonde victims are turning up around the city with various body parts missing. Along with the affirmatively borrowed body parts each victim also has a mysterious tattoo inked into their skin. Two policemen are assigned to the case, but owing to their general approach of screaming at witnesses and breaking down random doors they don’t really get anything useful out of the people they interview. Throw in several psychologists, a few strippers, many useless bible quotes and the use of big words where it’s painfully clear that nobody understands what the hell they’re saying and you’ve basically got the premise of this movie. I wish I could say more about it, but the plot is just too hopelessly convoluted to do anything useful with it.

Even just recalling it fills me with a mild rage…

Wasn’t sure that the Breast-O-Meter was actually going to be able to handle this movie. The many rats and hamsters that keep the machine going were just about to give up on life but thankfully the movie ended just before their little hearts could give out. It really was just 85 minutes of boobs and breasts and jugs, oh my! In amongst this breast-induced haze I do seem to recall that there was some form of a plot tying all these breasts together, although to be honest you really can’t expect an awful lot from a movie with Comic Sans credits.

For the Bible sayeth, 'Thou shalt not suffer a witch to live in a neon house!'

Alright, let me see if I can remember how to put the pieces of this movie back together. The movie begins with two fools looking for a party that some random female invited them to in a neon house on the top of a suburban hill. Despite the fact that they are the only guests, the neon house is creepy as hell and it has a butler that can’t speak, walks funny and is wearing a leather mask, the two go against their better judgement in the hopes of having sexual relations with a woman that evening. The one guy seems to have some semblance of a brain and insists that they don’t eat or drink anything they’re offered, but when a foursome of buxom women offer to take them into a dungeon all common sense goes out the window. These women are witches and for the life of me I can’t remember the names of the three lesser ones. I do remember that they are led by a woman named Auriana, the breastiest witch of all. As they say, one thing lead to another that night and before the men knew it their heads had been ripped off their bodies and burned as an offering to some malevolent being. 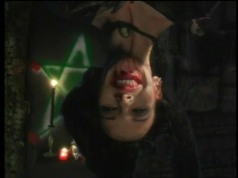 That awkward moment when a witch mistakes herself for a vampire.

Now of course there’s a very clever reason for all the beheadings going on. This particular coven of witches is dedicated to the worship of a very unspecific and vague anti-God and they need to sacrifice 666 souls to him. The deadline for the sacrifices? Halloween (aka All Hallow’s Eve, aka The Devil’s Night). See? I told you the people behind this movie were clever. So now the witches need an extra clever and subtle way to lure people into their dungeon to sacrifice to this Grey Lord. They decide to go for the most obvious solution and open a very loud strip club called Sin n Skin with a very angry bitch at the door and a very classy clientele of Hell’s Angels rejects. Now in this club there are many, many breasts of varying sizes and silicone content, but the very best incident comes when a policeman goes undercover and tries to arrest one of the witches for prostitution. Not one to go down lightly (pun intended) she rips the man’s arm off and beats him to death with it. Auriana is less than impressed because now the man can’t be sacrificed (something about quality standards) but young witches do tend to get carried away, so you can’t stay mad forever.

The glue that holds the movie together.

Now the plotline that’s desperately trying to hold this movie together like a pair of elastic pants involves Damian (I think) and Eliza and their two friends whose names also escape me. Whatever their names are Damian (?) and Eliza have been together for a while and Eliza’s pissed that Damian’s been going to Sin n Skin. The only obvious solution to this is for Damian to drag Eliza to Sin n Skin and show her just how classy a place it is. Damian’s buddy (possibly one of the biggest douchebags horror has yet to produce) and Eliza’s friend tag along for the ride. Once they get there one of the witch strippers is on the pole and her and Eliza connect in an otherworldly way involving flashbacks that make no sense and are never explained. After the show the four are invited back to the neon house for a party and the beginning of the movie basically runs through itself again, just with different people. Will the four survive? Well, I can’t tell you that. But know this: THERE WILL BE BREASTS!

As a final thought, one of the best parts of this movie involves a cameo by Ron Jeremy as a bible salesman called Craven Moorehead. Craven Moorhead. See? Really clever and witty people were involved in the making of this movie.