Well, tis the season and all that, so it felt only right that I watch a Christmas themed movie to bring myself fully into the spirit of the holidays. I watched the original Jack Frost last year so its sequel seemed as good a place as any to start. It was a joyful watch and a reminder of why I enjoy watching movies like this (crap ones, not Christmas ones…): in no way does it take itself seriously and it’s just too delightfully daft to not enjoy. If you only watch one Christmas-themed movie this year, make sure that it involves the best damn killer snowman out there!

Extreme Barbecuing is a dangerous and unforgiving sport.

A year has passed since Jack Frost attacked the little town of Snowmonton. Sam Tiler, the town’s sheriff, has been struggling to come to terms with what happened that fateful night. His wife and friends have moved on, convinced that Jack can’t escape from his anti-freeze prison and his therapist openly laughs at him when he brings up the topic of the killer snowman. All in all, it’s a tough time for Sam, and it’s about to get a lot tougher. Unbeknownst to everyone a team of scientists with a redneck scout have dug up the anti-freeze bottles with Jack in them and are trying to revive him. The experiments are wholly unsuccessful until one night when the janitor comes in to clean the lab. Being a clumsy fool and showing no thought to the many delicate glass beakers floating around he just continuously bashes into the fish tank with Jack in it. In doing this he manages to tip a cup of coffee into the tank and all hell breaks loose. Jack can use the water molecules in the coffee to reform and the janitor quickly lands up with a piece of fish tank through his face.

To take Sam’s mind off his troubles his wife Anne decides that they should go away for Christmas this year. Their friends Joe and Marla are getting married in the Bahamas and it seems as good a place as any to go. Even if shit were to hit the fan, what are the chances of a killer snowman turning up on a tropical island anyway? This, at least, was the plan. Unfortunately it turns out that killer snowmen can turn up on tropical islands. It would appear that Jack has had some time to consolidate his powers and can now withstand warmer climates. When dead bodies start appearing all over the island, however, the senile Colonel Hickering who runs the resort is quite happy to blame it all on shark attacks (even if the body is miles inland). Nobody seems willing to accept that a killer snowman is loose in the Bahamas. 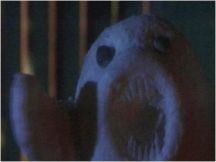 It’s only when it suddenly starts snowing and people’s arms are being taken off by renegade snowballs that anyone starts to think that something strange is going on. Those who have encountered Jack before decide to use a tried-and-tested method of snowman catching: trap him in anti-freeze. Problem is that Jack can be hurt by the anti-freeze but it doesn’t completely liquidate him like it did before. He’s also throwing up snowballs everywhere he goes, and herein lies the best part of the movie. These aren’t regular snowballs. They’re eggs. And in these eggs are the most adorable baby snowmen with a cute demeanour and blood rage like you can’t imagine. So now the gang has to contend with Jack and hundreds of his little offspring who are seemingly indestructible. Sam’s also flown over the cuckoo’s nest since the anti-freeze didn’t work. How they learn to deal with Jack Frost 2.0 and his offspring is another wonder that you just have to watch to appreciate.

Since it’s Christmas tomorrow I thought I’d dig this little piece of winter blood-shed and dust it off. I remember watching this movie when I was much younger and actually being quite scared – proof that some childhood adventures are best left alone. Watching it again when I’m a little older and more used to CGI effects, there was still something warm and inviting about seeing the Creditsmas Tree as the movie opened. For those who haven’t seen one of these before, a Creditsmas Tree is just like a Christmas Tree, but instead of hanging tinsel and ornaments on it you hang the opening credits. I would also like to offer advanced warning for those who hasn’t seen this movie: the snowman in the movie looks nothing like the snowman on the cover. The actual snowman is just that, a snowman. Carrot for a nose, coal for eyes, twigs for eyebrows and spray-painted oven gloves for snow. And he’s evil, of course. But for all this movie is bad it is still entertaining because you can laugh at the sheer absurdity of this snowman rolling and melting his way through town on his killing spree.

One night, in the middle of a blizzard that puts this year’s snowfall in Europe and Britain to shame, federal police are transporting mass-murderer Jack Frost who is scheduled to be executed at midnight that evening. The route takes them through the town of Snomonton, the place where Jack was eventually apprehended by the local sheriff after eluding the police for five years and leaving a trail of 38 murder victims. Unfortunately, with visibility on the road being virtually non-existent, the transport drivers don’t notice the oncoming vehicle carrying a load of genetic-experiment grade acid and the two collide with one another. Jack manages to escape from the transport vehicle after the accident but lands up being in the line of fire when the truck containing the acid breaches, melting Jack on the spot.

In Snomonton itself Sheriff Sam Tiler is still fixated with Jack Frost and cannot forget the man’s threats to find a way to get back at the man who had him put away. These fears are compounded when members of this quiet little community begin to show up dead, and soon two members of the FBI come into town and order a curfew to be enforced. While the police and FBI bicker (and beat up one another and a few townsfolk) about how things should be done, we discover that the acid that melted Jack was actually a genetic experiment aimed and storing human DNA in inanimate objects so that, in the event of the apocalypse, we as a species could be resurrected later using this stored DNA. As usual this experiment doesn’t go exactly to plan and instead of just storing Jack’s DNA in the snow the acid has actually bonded the two, bringing Jack back to life in the form of a snowman (this is also the beginning of a LONG discussion about how the soul is real).

The people in charge of bringing the snowman to justice now fall into two groups: Sam, his friend Paul and kickass police secretary Marla who want to kill Jack and ‘FBI’ agents Manner and Stone, who are actually from the company that developed the acid, who are under orders to capture and contain Jack for further study. With the use of aerosols, hairdryers, lighters, salt and anti-freeze, it’s now up to this rag-tag team to stop the world’s most pissed off snow cone before he manages to get hold of Sam, his family and every horny teenager in the little town of Snomonton.