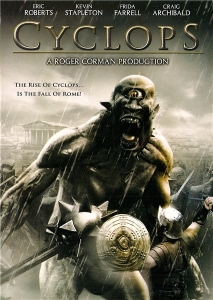 Roger Corman and Eric Roberts strike again! Having already subjected myself to Sharktopus, I felt the perverse need to watch another movie where this terrible twosome join forces to melt the brains of anyone who owns a TV. Thankfully, I wasn’t alone in this one: I had my good friend Tropical Mary helping me through it. As she put it, “Cyclops is a tale of two cities: Rome and un-Rome.”

Now, I know this isn’t a horror movie, but there is some logic floating around: since both myself and Tropical Mary are classicists, and in particular I have spent the past 7 years studying Roman history, to see this kind of thing happen to Rome is just bloody horrifying to  me. The story is simple enough: giant cyclops is captured, taken to Rome, escapes, is recaptured and then used in gladiatorial combat because the Emperor Tiberius (Eric Roberts, who always looks so fucking smug with himself) thinks it’s a good idea. Since it really is that simple I thought, instead of running through the movie, I would just present the incredibly long list of Life’s Lessons Learned as compiled by myself and Tropical Mary. Enjoy! 🙂

I would recommend giving it a watch – it’s one of those movies where I was laughing so hard I had tears running down my face.