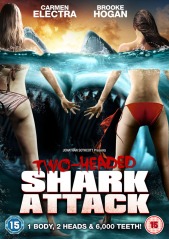 OK, I’m gonna put an idea out there and you can all tell me what you think. Four things made this movie standout when I first heard about it: 1) It’s made by the Asylum, 2) its leading ladies are Carmen Electra and 3) Brooke Hogan and, of course, 4) it’s about a giant 2-headed man-eating shark! Now, when one considers all these things, one might expect that this would be a belly full of laughs from beginning to end. One may just be disappointed. Perhaps it’s because I watched it back-to-back with Terror at Blood Fart Lake and nothing was going to compare with the awesome insanity of that movie but this little nautical nightmare just wasn’t as much fun as I was hoping for. Don’t get me wrong, it’s highly amusing to watch, but it just doesn’t have that b-grade x-factor that would let it go down in memory as a totally satisfying experience.

This woman is a doctor.

Now, if I understand this movie correctly (which is difficult since it all just seems so unlikely), Charlie O’Connell is a university professor taking his class out to sea to investigate something or other. What they’re investigating hardly seems important since they can’t even master the use of a compass, so we’re not really expecting them to turn out to be anything spectacular later on in life. He’s accompanied by his wife Carmen Electra, a brilliant doctor who’s dedicated her time to help any wary sailor out and cure whatever it is that may be ailing them. Everything’s going wonderfully until the boat manages to get a dead shark lodged in its propellers, bring the little exploratory expedition to an end. Thankfully there’s an atoll (which isn’t really an atoll) nearby where the group hopes they can salvage some materials to fix the boat.

This woman is the brains of the outfit.

The boat’s been a little bit more damaged than the group initially realises since the shark lodged in the propeller blades soon became a snack for the massive 2-headed mutant swimming around these waters. Being a rather messy and enthusiastic eater the 2-header smashed the boat’s hull and the ship’s starting to take on water and any of the crew members who try to fix it end up mysteriously eaten. Back on the atoll the students are doing there utmost best to be morons and go about being general asses and bitches. Some lesbian experimentation and threesome action comes to an abrupt halt when all concerned land up being eaten (although not in the way the one guy originally intended). Oh yeah, and the atoll’s sinking. The group’s gonna have to hustle themselves and fix the boat quickly before the land disappears from underneath them.

These women are just doing what comes naturally.

Thankfully Brooke Hogan’s here to save the day. Now, it’s not so much that she’s a genius as the rest of the group would lose a spelling bee to an amoeba but, in times of mutant shark attacks and atoll sinkings, one cannot afford to be picky. With her mannish good looks, straw-blonde hair and breasts that are forever threatening to fall out of her bikini, Brooke successfully manages to fix three separate boats AND figure out what’s drawing the sharks’ attention. It would appear that the creature’s two heads make it more sensitive to noise in the water, thus making it rather tricky to escape by boat. With land becoming an increasingly rare commodity and spare students that can be used as shark snacks running out Brooke and Co. will have to find a way of either teleporting off the island, sinking the main boat to send out a distress beacon or pull together a MacGyver-style plan to kill the 2-headed beast.