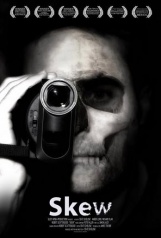 First of all, let it be stated for the record that I was given a screener copy of this movie for review, but that doesn’t mean that I have to say nice things about it. Let me also say that I’m not the biggest fan of found footage movies, purely because they can either turn out spectacularly (eg. the original Blair Witch Project) or as a horrible mess (eg. Cloverfield). Skew manages to pull off the genre quite well, mainly through blending in a number of other genres to keep the storyline going. On the whole it’s a good movie and worth a watch, but it does have a few problems. While it does deliver on the scares they are, at times, a bit few and far between and you have to sit through a lot of mundane dialogue before the next thing happens. The acting tends to come in waves, going from outstanding one minute to nightmarishly amateur the next (and there are only 3 people in the movie, so this is quite something). The main thing that actually does this movie in is not what it was so much as what it could have been: with all that was built up there was SO much more that could have been done with it. Anyways, enough of all that, let’s get on with the story!

This is what happens when you put a cyclops in a spin cycle.

Simon, Eva and Richard have been friends for ages and, as good friends do for other good friends, they’re getting ready to go on a little road trip to a friend’s wedding. Simon’s been having issues with his girlfriend Laura so she’s decided not to tag along (you will be reminded of this many times during the movie). Simon’s also a bit of an amateur film maker so he’s decided to record absolutely everything that happens on the road for reasons relating to a damaged childhood that you don’t really want to know about here. The trip starts out nice enough and everyone seems relatively alright with having a camera shoved in their faces for the greater part of the day, but things soon start to become a little weird for our little trio of travelling besties. First they run over a coyote (something that Eva seems to think should be reported to the highest echelons of power in the land), then the desk clerk at the motel they’re staying at is killed. To distract themselves from the terror Richard and Eva take turns filming their very private conversations that Simon mustn’t hear on Simon’s camera.

Nipple stands from beyond the grave!

The trip becomes even stranger as we move on from coyotes to entire bus loads of people, shop owners and policemen dying wherever our little group ventures. To top that crazy, the camera also has this weird way of distorting people’s faces while recording and it has a tendency to show the viewer angry ghosts everywhere. Simon’s starting to get a little freaked out but feels mysteriously drawn to the camera and compelled to continue filming everything. Eva’s beginning to feel uncomfortable with his odd obsession and Richard, as the big strong boyfriend, won’t have someone unsettling his lady, so he starts going off on random angry outbursts that amount to nothing. The fact that they amount to nothing may have something to do with the fact that this guy can’t really pull off a facial expression other than loveable douche, but that’s beside the point.

The group must now make their to the wedding party in the face of Simon’s growing paranoia, a camera that may or may not be a portal to hell and an odd love triangle that doesn’t really go anywhere but serves to help heighten the “tension”.