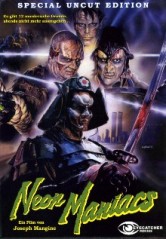 In life there has to be that one constant. In the face of work, commitments, bills and demonically possessed kittens there has to be that one source of comfort that you can fall back on, that safe place where you know everything’s alright and that your troubles won’t find you. For me, that safe place is neon coloured and dressed in spandex. The 80s b-movie is an amazing thing and makes no excuses for what it is. It’s daft, it’s filled to the brim with bad hair and it captures a time when mom jeans were just being handed out to women of all shapes, sizes and ages. One can’t overdo it with the 80s b-movie, however, lest we be fooled into thinking the mullet is an acceptable choice of hairstyle, but let’s take this moment to look back on a more strikingly colourful era and on the wonder that is Neon Maniacs.

…and your little dog too!

The scene of the crime is San Francisco, a city of giant bridges, horny teenagers and excessive neon signs. It was a time when all the police were absolute pigs whose powers stopped just short of being able to beat a 10-year-old to within an inch of their lives for any arbitrary reason. Natalie and all her friends are out for the night in the park where they will indulge in the youthful pleasures of football, underage beer drinking and open air sex. That is, until the Neon Maniacs arrive on the scene. I’m guessing that since none of them are particularly neon in colour their name is some allusion to the sins of the city. With each individual dressed as a character from the past (ranging from cave man to Samurai to Native American) they make quick work of the gathered teenagers, hacking them to pieces and dragging their corpses off to their lair. Only Natalie survives the horrible incident, yet no one seems to believe her about who the assailants were.

God only knows what that catheter’s draining into now…

Natalie’s a tough old broad, however, and isn’t about to let the brutal massacre of all her friends get her down. Displaying no emotion whatsoever she decides to go back to school the very next day. Her friends are dead so I’m guessing the idea is that there’s nothing she can do about it, so why worry? Since the police in town are not only pigs but the sort that wait for clear instructions to come from on high no official statement has been made and Natalie’s friends are officially reported missing. Assuming that it’s all some sort of elaborate prank the families of said missing friends start to give Natalie trouble, demanding to know where their loved ones are. When Natalie can’t provide them with any answers the principal suspends her from school until such time as the situation sorts itself out.

As good an argument as any for Orwellian historical revisionism.

All this tragedy and upset doesn’t mean, of course, that Natalie can’t quickly resume her dating life. Onto the scene comes Steven, the most bizarre nerd / delivery boy / dog walker / aspiring rock star / sex machine combination to ever grace the small screen. Having been enamoured with Natalie for years he whole heartedly buys into the story of the Neon Maniacs and promises to keep her safe and help bring an end to their (rather short) reign of terror. They will be aided in their battle against evil by Paula, an enthusiastic high school amateur director (making her more highly qualified than many of the directors of the movies I’ve watched) and monster fan. Armed with only their wits, some water pistols, their inability to experience emotions and their general teenage angst it’s up to these three to save the world from the Neon Maniacs and their super sharp Shogun Knives.

End of the World Month 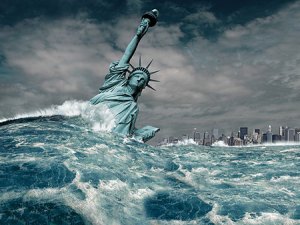 Now we all know that it’s 2012 and, according to some folk, our dear little planet is going to be destroyed at the end of the year. If I know one thing about humanity it’s that the end of the world will be like Christmas Eve shopping: a mad and pointless rush. To that end I thought I’d get all my bad end-of-the-world movies in early and beat the rush so that, should the world actually come to an end, I can see it in with my feet up, comfortable in the knowledge that I have done my bit.

I have some real treats in store for everyone and we’ll be seeing the world end in a number of incredibly cheesy ways: ice ages, floods, aliens, monsters, global warming; you name it, it’ll end that way. I’m also keeping my eye out for how many times something happens to the statue of liberty; if the world’s gonna end she apparently has to be the first thing to go.

So I do hope you’ll join me throughout February on this little adventure through humanity’s multiple ends. And remember: no matter what happens, just keep on dancing 😉 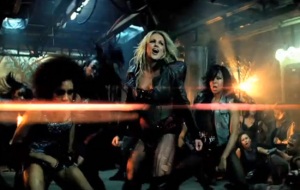 Odysseus and the Isle of Mists 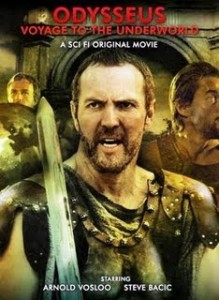 Everyone needs a calling in life. For some it’s a career, for others it’s helping the poor. For me and all the voices, it’s watching b-grade horror movies. When I join forces with Tropical Mary the mission is to take SyFy movies based (loosely) on classical antiquity and rip it to shreds. It began with Cyclops, a movie that hurt me badly since Roman history is my thing. It was decided that we needed to find something that would hurt Tropical Mary just as much, since Greek history is more her thing. The gods seemed to have heard our prayers and delivered Odysseus and the Isle of Mists to us.

I won’t burden you with the entire plotline, because there really isn’t all that much of it, and the main point of doing this review is the lessons we learned through watching the movie. The year is 1180 BC-ish, Troy has been defeated and Odysseus has begun his 10 year journey to return home to Ithaca. Accompanying Odysseus and his small team is the poet Homer, who is acting as the scribe and recording Odysseus’ adventures as they travel along. The story about to unfold is so horrifying that Homer decided to leave it out of his Odyssey. Odysseus and his men are about to come upon the Isle of the Mists, a dreadful place where death is in the very air. It’s inhabited by a number of foul creatures who look a bit like gargoyles done with terrible CGI. More frighteningly, though, is the goddess Persephone, wife of Hades and queen of the Underworld. The other gods of Olympus have bound her to the island for attempting to usurp the throne from Zeus, and she has a number of sneaky plans in mind to get Odysseus and his men to help her off the island and enslave all mankind.

BUY ODYSSEUS AND THE ISLE OF MISTS AT AMAZON.COM 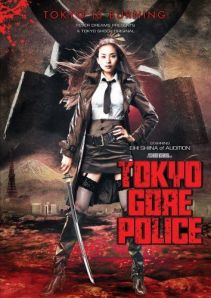 Few are the times that I am truly lost for words, but this has got to be one of those few times. Clearly the fallout from Hiroshima and Nagasaki had much greater long-term effects than the world initially realised because something is very, VERY wrong in Japan. I’m not scared of gore and I’m not scared of weird shit but if a movie’s gonna have them there has to be some kind of purpose to it. Not here, not here at all. This movie is just under two hours of non-stop blood and guts and boobs and butts. Thankfully I watched it with a good friend of mine so we spent most of the movie in stitches laughing because if I hadn’t I don’t know if I’d would’ve come out alright on the other side. Who the people at IMDB are that think this movie deserves a 6.1 / 10 I don’t know and to show the levels of weird I’m not going to review this movie in the normal 3-pictures-and-text fashion. This is for two reasons: firstly the storyline is too thin to properly write about (near-future Japan, police are privatised, mutants are on the run, one girl one destiny – all there is to it) and I feel a pictorial review best illuminates this movie’s oddest qualities. 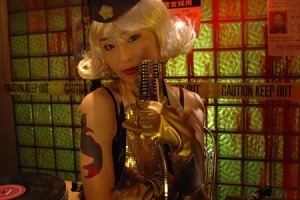 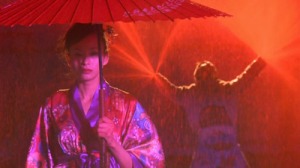 You should always carry an umbrella around in case you decide to cut someone’s arms off. No amount of washing will get blood out of a silk mini kimono. 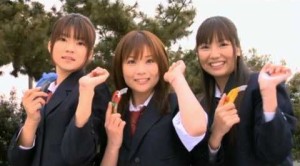 In the future your fondest memories will be of you and your best friends sitting together for an afternoon performing group mutilation. 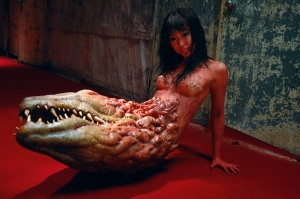 The rare and elusive vagigator is a worthy and honourable foe. 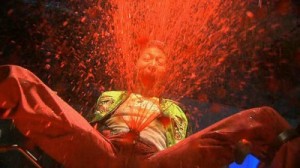 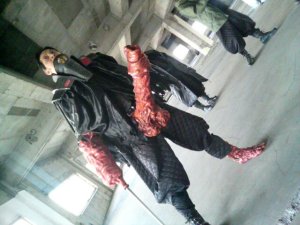 I’m just eternally grateful that it turned out to be a laser gun rather than some other kind of ammunition. 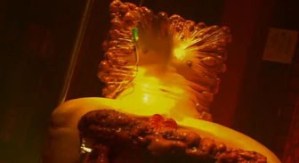 For the ultimate fetish enthusiast: The Golden Shower Breathing Chair