It’s very easy to tell a movie that was made in the days before the Internet and Wikipedia became readily available in the majority of people’s households. You could throw phrases like ‘Lumeria’ and ‘5 million-year-old civilisation’ around and nobody would have thought twice about it because very few people would have taken the time afterwards to go to the library and check the information out. An historian at heart, however, I’m not like that and I do like to check out the technical and historical accuracy of any civilisation I’m not familiar with when it’s just thrown into a movie. I’ll come back to that a bit later but nonetheless Blood Diner is a delightful slab of cheese that takes good acting, good film making and historical accuracy and throws it out the window and replaces it with many breasts, a brain in a jar and cannibalism. All in all, not a bad way to spend 88 minutes of your life 🙂

Someone's gonna lose an eye before this is over...

Before our tale of 80s terror can begin we first have to travel back to 1963 where little Michael and George Tutman are playing innocently in their lounge while the babysitter runs around the house in a panic about having run out of tampons. Having eventually decided that the only solution to the problem is to run down to the local pharmacy and pick up some more she leaves just as the radio announcer issues a warning that there’s a madman running around in the neighbourhood chopping up innocent young women. Just after she leaves the madman comes to the house, smashes down the door and charges in covered in blood, screaming like a maniac and wielding his meat cleaver above his head. The boys are delighted to see him because the maniac is their uncle Anwar Namtut who has been teaching them all about the occult. Sadly their reunion is cut short when the police rock up at the house and gun Anwar down while the boys watch from a window. This psychological trauma will lead the boys down a dark path of the occult, cannibalism and the devilish ability to make clock’s run backwards. Anyone who comes into contact with them will forever run the risk of either being eaten or never knowing if they’re running late for work or not. 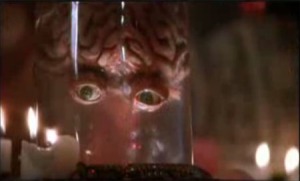 Some people keep diaries to remember the past. Others have their brains pickled.

Flash forward to 1987 and the brothers are all grown up and doing quite well for themselves: they’ve opened up their own little diner and their food is the talk of the town. They’re also busy digging up their dead uncle so that, through the power of black magic and a little vinegar, they can revive his brain and keep it in a jar in a similar way to the demon in Possessed by the Night. Now of course there’s a perfectly logical reason behind all of this, which the brain kindly fills us in on. Back in 1963 when he was killed the first time Anwar was busy trying to collect all the ingredients he needed so that he could awaken the goddess Sheetar, a diabolical divinity of the Lumerian people whose civilisation flourished 5 million years ago. 5 million years ago? People hadn’t evolved out of the trees yet and Lumeria was believed to be a continent that sank beneath the waves, not a part of the American outback! Feels good to get that out. Anyways Anwar the Brain now needs the boys to finish his work and help prepare a Lumerian feast that will summon Sheetar to earth on the night when Jupiter and the Moon are aligned with one another. Makes perfect sense to me. 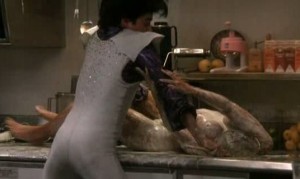 Up until I watched this movie I’d never even heard of a Lumerian Feast, let alone knew how to go about preparing one, and I feel it’s an important thing to learn. After all you never know when the day will come when you want to give a bloodthirsty, angry goddess a mortal form. It’s quite an involved process so pay careful attention and take notes if necessary. Firstly the Moon and Jupiter need to be coming into alignment. You then need to kill around 2 dozen slutty girls and use bits of their bodies to stitch together a new body for Sheetar to dwell in when she comes to earth. You then need to kill around half a dozen more sluts and use select internal organs as the basis for the Lumerian stew that you will feed to your guests later. To make the stew you add the body parts to a mixture of chicken stock and root vegetables and simmer over a low heat until the feast begins. You then need to acquire a virgin and have her ready for Sheetar to eat as soon as she takes her mortal form. Virgins are hard to come by so start shopping early. Finally you need to find a venue full of people who you can drug and turn into zombies so that they will eat the stew and begin having an orgy. Sheetar likes to be resurrected during fun gatherings. Bring the mortal Sheetar body to the venue, drug the guests, lay the stew out and tie the virgin up, let the Moon and Jupiter align and recite some incantations. Next thing Bob’s your uncle and you having a living goddess ready to commit all manner of atrocities. Enjoy!