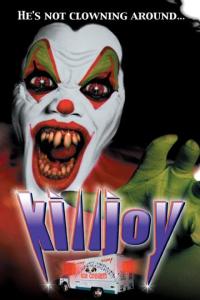 For a horror fanatic Halloween is that one really important day that you want to spend with those closest to you. For me there was no one I would rather spend the day with than My Friend The Killer Clown Movie. We go back a long way and I hadn’t seen him since we went camping together in June at the beautiful Camp Blood. Since it had been such a long time I thought I’d give him a call and arrange to get together in a bad neighbourhood to have a sit down and a catch up. Now, if weird shit’s going to happen to anyone it’s going to happen to My Friend The Killer Clown Movie, so while we sat at a little corner café drinking very manly lattes he began telling me about the movie Killjoy, a movie that had made him feel more like a fool than many others he’s been forced to star in.

What a lot of people don’t know about My Friend The Killer Clown Movie is that, while he is a bit of a psychotic lunatic, he’s very much in favour of equal opportunity. When he heard that Killjoy would be set in the hood with gangsters and guns and the like, he thought that this would be an amazing opportunity to prove that he isn’t a racist. Hindsight is an amazing thing and he now feels like this movie has set the civil rights movement back by about 50 years, something that brings a tear to his eye. After I wiped away his tears he told me the basic outline of what happened in the movie. Michael is the local nerd that no one likes, and he has a very big crush on Jada. Jada already has a boyfriend named Lorenzo, and he’s pretty thug. When he catches Jada speaking to Michael he gets his friends T-Bone and Baby Boy to beat the crap out of Michael. Rising above the situation Michael decides to perform a little black magic and summon a demon clown, the movie’s eponymous Killjoy, to take revenge, but Lorenzo & Co. kill Michael before the spell can be properly enacted.

Minimalist seances were all the rage back in 2000.

Being so close to My Friend The Killer Clown Movie I could tell that recounting this acting experience was very hard for him, so I decided to let him take his time. To put him more at ease we finished our lattes, ordered another round, took a few minutes to finish polishing our guns at the table and started taunting the odd old lady that walked by with them. This seemed to cheer him up a little and he continued with the story. A year has passed and Jada has since broken up with Lorenzo. She’s now romantically attached to a man named Jamal, a much sweeter man who knows how to treat his bitches and hoes right. Lorenzo & Co. are still around being thugs, but things are about to go rather badly for them. It seems that Michael’s spell was a slow-release one and has just kicked into effect, summoning Killjoy to our reality and letting him loose on the world. His ice-cream truck is a portal to his own dimension and Lorenzo & Co. are none too bright, so Killjoy lures them into the truck with promises of illegal drugs and discount ice-cream. Once trapped he then kills them in a number of ways that can only be done on a minimal budget before sending their bodies back to our dimension. 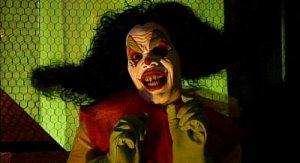 It's terribly sad to see a killer clown in the post-stroke phase of his life.

By this point we were all latted out and in the mood to torment some other people than just the old ladies we threatened to shoot, so me and My Friend The Killer Clown Movie decided to go for a walk, hand in hand, through this bad neighbourhood. As we walked along he told me the rest his sad story on the set of Killjoy. Playing the clown in this movie required that he become a lot more gangsta than he really is, learning to speak the lingo and acting like he rode in on the special bus. For reasons neither he nor the director could explain Killjoy now started to go after Jada, Jamal and their friend Monique. Thankfully a homeless man appears at random and tells them exactly what they need to do in order to stop the clown from killing them and trap him in his own dimension once more. Along the way they’ll encounter the spirits of Lorenzo & Co. and Michael, who’ll do anything to stop them. With faces that don’t move and voices that don’t range, our little group must ignore these spirits and bring Killjoy’s reign of terror to an end once and for all.

And so my lovely day with My Friend The Killer Clown Movie came to an end. I felt that him telling me about this awful movie he had starred in, with such good intentions, had brought us even closer together. In the back of my mind I also thought he was a bit of an idiot for starring in the movie’s two sequels, but decided that that was a conversation for another day. After a quick hug and a grab of the ass I went home, but promised to call him soon to arrange our next get together.

Welcome to the second instalment of You Broke It: 3 Trilogies That Went Awry. Today we’ll be looking at the third movie in the Urban Legends franchise, Bloody Mary. I chose this movie because it fit many of the same criteria as I’ll Always Know What You Did Last Summer in that, while the first two Urban Legends movies were not directly linked, this movie takes the story down a completely different track and completely abandons its predecessors’ slasher elements in favour of being a ghost story. I would also like to state from the get-go that, despite the title, the Bloody Mary myth is used very loosely and only as a means of justifying adding this movie to the franchise.

Blink and you lose!

To begin our story we need to go back in time to the summer of ’69, albeit a far more tragic version than the one Bryan Adams has been describing for all these years. It’s the local high school’s homecoming celebration (admittedly, living in South Africa, I have no clue how homecoming works or what it’s for) and Mary Banner just feels like the most important girl in the whole school. The alpha jock has decided to dump his bitch of a girlfriend Dawn and asks Mary to the dance, proving that every now and then the plain girl can get the guy. He even manages to hook Mary’s 2 best friends Gina and Grace up with two of his buddies so that they can all be a matching set. If only good things like this did happen to the plain girl. Seems like the boys and Dawn aren’t happy about the fact that Mary and Co. don’t worship the ground the walk on so they decide to drug the three girls and play a little prank on them. Mary, not having any of it, runs away and tries to find help. Unfortunately for her she lands up cornered in the basement and, while trying to escape, she trips and knocks her head on the table, killing her. Not wanting to go to jail the alpha jock takes her body and hides it in a trunk, where it has stayed ever since. 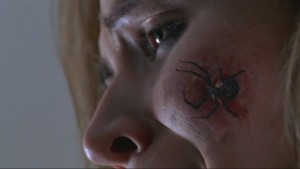 Yeah, poor hygiene will lead to things like this...

Flash forward to 2005 and history’s busy repeating itself, just this time it has the use of modern technology. Samantha works for the school newspaper and recently published an article debating whether footballers should be given good grades simply because they know how to run around a field and throw a ball to one another. The article is accompanied by a very unflattering photograph of three jocks in particular. When homecoming rolls round Sam and her two friends decide that they don’t want to go and instead stage a slumber party. The boys, upset at how their vast levels of intelligence have been insulted by Sam’s article, rock up in the middle of the night, give the girls some chloroform and stick them in a room in the old abandoned paper mill. Unlike the events of the summer of ’69, however, all of the girls make it out alive and, the scare aside, seem none the worse for wear and continue on with their lives. This is when things start to get a little bit strange. 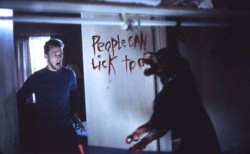 Yes. Yes they can.

Having shouted out the words ‘Bloody Mary’ three times during the slumber party (although not into a mirror or anything even mildly reflective) Sam and her friends have somehow managed to invoke the spirit of Mary Banner, and she’s pissed. Seeing this turn of events and Sam’s similar situation Mary decides that now is the time to take her revenge and kill those people involved in Sam’s kidnapping. It starts off with a simple homage to Aerobicide where one of the jocks is fried to a crisp in a sun tanning bed but gradually the attacks become more sinister and Mary’s ghost becomes angrier and angrier. What Sam and her twin brother David need to find out is why Mary has come back and why she has chosen this as her method of seeking revenge. With the help of Grace they will seek to uncover the truth about what happened all those years ago, but they will not seek to find out how Grace, a heavy stoner who hasn’t been outside her house in years, manages to get groceries and daily copies of the newspaper.

Some final thoughts on the matter. Like I’ll Always Know What You Did Last Summer this isn’t a terrible movie and, had it been released as a stand-alone film, would probably have been reasonably entertaining. It suffers from the fact that it tries to force the urban legend angle where it really doesn’t fit into the plot. The reference to Bloody Mary herself is only used so that the movie can in some way try to fit in with its predecessors and the murders using urban legends is in no way justified or explained. The use of newspaper clippings referring to the second Urban Legends movie, as well as a few recycled scenes, also fail to make this in any way a part of a continuous narrative. Whoever’s idea this was should hang their head in shame (just a little bit) for trying to sell a ghost story by piggy backing on two slasher films and hoping that nobody would notice. Because we did.