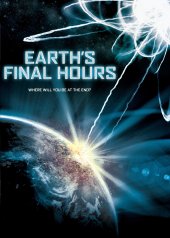 Just look at that movie poster, it’s like something the Discovery Channel would use to advertise their latest documentary. While I remain sceptical so far as this movie’s educational benefits are concerned I can vouch for the fact that it’s one of the better movies I’ve seen this month. Not better in the sense that it has brilliant actors or deserves awards or anything, but better in that it’s a fun variety of cheese. If you like trashy sci-fi with a few good laughs then you could do far worse than Earth’s Final Hours. 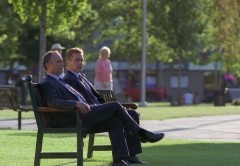 Lovely day for an apocalypse, don’t you think?

What I like about this movie is that it’s very forward thinking in the end of the world department. Realising that black holes are very last season in the whole apocalyptic movie industry the guys behind this one decided to take the end of the world in an entirely different direction. What if the earth was hit, not by a black hole, but a white hole? It’s crazy, I know, but it was just the thing this movie needed to really make it stand out from its competitors; it adds a completely different dynamic to mankind’s absolute destruction. White holes, unlike their more emo counterparts, compress and then expel matter away from themselves. So, rather than the whole earth being compressed and vacuumed up into nothingness, Earth’s Final Hours has a small chunk of compressed matter blow straight through the planet. See? Very forward thinking movie. 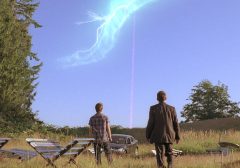 Now I can hear you all asking, “But James, how would we know if a white hole had blown something right through the Earth?” That, dear reader, is very simple. All you have to do is let a rogue scientist (preferably one who’s trying to evade the US government) loose in a number of fields and let him go about collecting data on the phenomenon. He’ll set up a whole bunch of instruments and satellites to gather any information he can, but ultimately the best way to know when something’s happened is to keep an eye on him. First of all you’ll hear a giant explosion in the sky and the atmosphere will rip open slighty. Now atmospheric rip can obviously be the result of a number of things, so you now need to look at the scientist’s chest. If it is a piece of expelled white hole matter it will find its way to him, blow through his chest and then through the Earth. If this happens, you will know that you are witnessing a genuine apocalypse by way of a white hole.

Green Peace resorted to some weird shit in those desperate days.

By this point you all probably have 1000 different questions, not least being what kind of effect all this would have on the Earth. Well, the thing is, something that compressed and hitting the planet at that speed would not only go straight through but would also exert enough energy to completely halt the planet’s rotation. Not only is this hugely inconvenient because of the effect it would have on daylight savings but it would also result in the complete collapse of the magnetosphere, the layer created by the Earth’s rotation that protects us from solar radiation. All we can hope for in these dark days is that somewhere, somehow, there’s a mad scientist locked in an institution with knowledge of a satellite system that can restart the Earth and a rogue CIA agent and his family who care enough about humanity to help the mad scientist out. Will such a hero answer our desperate call? Watch and be amazed!