My 1987-themed month of July keeps on rolling, and with this one I was so close! It’s like the movie was standing in a little spot and just off in the distance was where it needed to be to make it good, but it was just too tired to make those final few steps. The best way to describe Backwoods (a.k.a. Geek) is that it’s a semi-decent play on the sort of story we first encountered in Deliverance and the closest thing to Wrong Turn you’ll find in the 80s. It’s one of those movies where you couldn’t say exactly what’s missing from it but it needed something to make it more suspenseful and make you wonder exactly what’s going to happen to the characters. And it’s a movie made in the 80s, and you have to work that little bit harder to overcome that problem.

OK, we're trapped in this movie. Anybody got an escape plan?

Backwoods centres around Karen and Jamie, two young people who have taken the weekend to enjoy the great outdoors and do some vigorous cycling and hiking. Well, Karen wants to do all the vigorous exercise and Jamie’s just being dragged along kicking and screaming. Now these two disturbed me somewhat when they introduced themselves to a park ranger as brother and sister. This disturbs me because, for a brother and sister, there’s an awful lot of sex going on between the two of them. I’m not sure if the director had some sort of weird sexual fantasy but I’m just going to take it that they were joking and go along my merry way. The two of them arrive at a beautiful park and Karen decides that they should camp there for the night, but only in some place that’s incredibly isolated and a trip through hell to get to. Thankfully the park ranger knows of just such a place, but warns the two against going there. Turns out, for the past 200 years, a small band of people had been trying to scratch out a living from the soil but they had all recently died off or moved on to greener pastures. Even with the people gone the locals don’t have a good feeling about the area, and even the ranger admits he doesn’t like to go up there too often. Obviously knowing better Karen and Jamie decide to go anyway and head off on their hike over hill and dale in an attempt to make it to their campsite before nightfall. 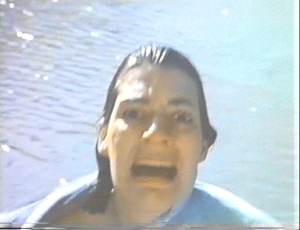 Maybe she's born with it...

Despite the long walk our loving couple makes it to camp with time to spare and sit down to a delightful fireside dinner of cold spam. This is followed by some sex and a relaxing (and fully clothed) night’s sleep. The morning after isn’t nearly as pleasant, however, as the two wake up to find a gun-wielding yokel a little way away from their tent and an injured young girl lying on the ground. B-horror is the place for miracles though and it turns out that Jamie is a doctor who manages to fix the enormous gash in the girl’s neck with nothing but a bandage and a little elbow grease. As a sign of gratitude Eben, the gun-wielding yokel and the little girl’s father, instructs the couple that they will be staying on his property for the night and that he’ll be feeding them. Karen thinks that this will be delightful and again drags Jamie by the hair along with her. Turns out that the old man’s place is a hole and his cooking’s horrible, but he mixes up a mean batch of moonshine so Jamie seems content to hang around a little longer. But things are not as they seem on this quiet and seemingly tranquil little farm, and all hell is about to break loose… 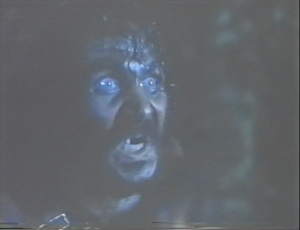 …from the chicken coop. Following a skinny dip down at the lake Karen is chased back to the house by a drooling madman. We discover that, in addition to the girl child Eben done got himself a boy child also, but the boy child’s just a tad bit touched in the head. William’s that there boy’s name and he’s as sweet as some ice-cold lemonade on a balmy summer’s day. That is unless he’s on an angry rampage and wants to chew through your neck, but Eben’s a forgiving man and does his best to keep his eldest under control. Karen, being a treat, decides that she and Jamie need to hang around for a while to make sure that Eben and his youngins are doing alright and, with a well-timed female guilt trip, manages to make Jamie agree with her. Unfortunately that very same day William decides that he wants to play with Karen’s hair while Jamie and Eben are out drinking moonshine and hunting small animals which eventually ends with Jamie shooting William and giving Eben a heart attack. Being the villain William doesn’t die of course; in fact he just jumps right off the roof, pulls the bullets out of his chest and keeps on going. Karen and Jamie now need to try and make it back to civilisation without William getting to them first and tearing them limb from limb.