Just thinking about this movie again makes me giggle. It was either a very entertaining hour and a half or the worst thing I’ve ever seen, I can’t quite decide. The best way to imagine this movie, I feel, is that had it been made in the 1950s it would have probably been an incredible creature feature. That may be what gives it a little bit of its charm. It has absolutely everything you could want from a b-movie: Aliens with Predator-like cloaking abilities, reverse Avatars, special effects that are right up there with the likes of Birdemic and a very 80s Casio soundtrack. All these wonderful things, wrapped up in a cacoon of blue candyfloss. Definitely not for the inexperienced b-movie viewer, but I’d give it a recommend to the more seasoned amongst us; if nothing else it’s one hell of an experience. It’s also the only movie I’ve watched during End of the World Month to score anything on the Breast-O-Meter.

Finally, a spaceship that runs entirely on old Atari hardware.

Earth is under siege! Unbeknownst to all of us our forests are slowly being invaded by an alien race known as the Scythe (that’s Scythe with a hard ‘c’). Thankfully a strange race of pink-haired blue people are flying around the universe doing their utmost best to protect all the other little species out there. Earth falls within Ava’s sphere of protection, but unfortunately the robot she tried to send down that usually takes care of the hard ‘c’ed Scythe has malfunctioned. The lesson in all this? Never send a robot in to do a knock off James Cameron extraterrestrial’s job. The reason the robots are sent in is because they are designed to see through the Scythe’s cloaking abilities rather than Ava having to fumble around with her arms out in front of her. What ever will she do now?

Irrefutable proof that alien life is far from sexy.

We’ll get to that in a minute, because before the Earth can be invaded and we as the audience can take it all seriously there needs to be a group of people in danger that Ava has to save. Enter our team of stereotypes: Jock, Jock’s Friend with Benefits, Rebel Girl, Nerdy Virgin Guy, Nerdy Asian Girl and Slut. This lot’ve been friends since they were knee-high to a grasshopper and are heading out to a camping spot that they’ve been going to since high school. OK, nobody’s really friends with Slut, but Jock’s hoping that she can pop Nerdy Virgin Guy’s cherry. It’s understandable why nobody really likes her: while not only a bitch she is entirely impractical and thinks that wearing a pair of hooker heals is perfectly alright for taking a hike through the woods. With the Scythe nearby and looking for blood, of course, poor choice in footwear will soon be the least of the group’s problems.

You just know there’s a Power Ranger steering this thing.

So, with a malfunctioning robot and an alien on the loose, Ava must come down to Earth and save us all from the horror. Being an alien and unable to breathe in  Earth’s atmosphere Ava will actually stay in her ship and send down a human avatar imbued with her life force to do the job. When she meets up with the group of hikers they’re a little bit wary of the leather-clad female with Ke$ha-like autotune for a voice but after a little story and nearly killing one of them they’re all ready to jump on board and do their bit to save the world. They need to find where the Robotar’s (the robot that’s going to protect the world) pod landed so that they can go and fix it. Trust will become an issue since the Scythe can shape shift into anyone whose DNA it has come into contact with and there’s the small issue of humanity being a hopelessly technologically backwards species. Can the group come together to power up the machine and save the world or is Earth doomed to becoming a plastic alien’s new breeding ground?

Admittedly when I started watching a movie that involved a hunting party being slowly killed and eaten by a giant pig, I had my reservations and doubts and thought that it could either work out really well and be amazing or go really badly and make me wish the pig was slowly eating me by the time I got to the end of it. Thankfully the movie turned out to be a lot of fun but in a very different way to what I was anticipating. The man-eating pig actually has a relatively small part to play in the movie’s action and what we have instead is a Deliverance-ish type movie with a horror movie’s edge to round it off in a blanket of tastiness and gore.

Sergeant McStud at your service ma'am!

We begin our tale of bacony deliciousness with young and attractive couple John and Brooks who awaken from a night sweet, sweet love-making. At least this is what I think happened since, as soon as he stands up, we get an ass shot from John and some lacy bra action from Brooks. John’s getting ready for a boys weekend with friends Ben (the black friend), Wayne (the Indian friend) and Quincy (the Stoner and presumably gay friend) while Brooks (the Asian girlfriend) decides to tag along to give it all a slightly feminine touch. With bags packed and every racial group covered the friends set out into the woods to John’s late uncle’s ranch where they can spend a fun weekend camping, drinking beer, shooting animals and feeling manly and rugged. En route they encounter a group of hippies that have the dangerous combination of being high as kites and armed to the teeth and a group of red neck lunatics living up the track from the ranch they’ll be camping at. The house itself is an absolute disaster with animal skeletons all over the floor and writing in blood all over the walls. Between the lunatics outside and somewhat creepy state of things inside most other people would start to feel a little uneasy, but not our gang. They came to have a boy’s weekend and by God they’re gonna have one!

We have found the fabled Naked Lake the ancients spoke of...

Having spent night in tents and John and Brooks enjoying another night of sweet, sweet love-making (this time brought about by discussing how animals bleed when you shoot them) the two love birds are awoken by two greasy red necks climbing into the tent with them. Thankfully these two, Jake and Ricky, know John from back-in-the-day when he was still growing up and living with his uncle and just felt like popping in to say hi. Once everyone is dressed, had coffee and sniffed some kind of drug Jake and Ricky decide to join the others on their pig-hunting expedition. To warm up and help the bonding process along they first shoot a baby deer with a bullet that explodes on impact and blows a hole in the side of the poor creature’s body. This is followed by some target practice on beer cans and, after discovering that Brooks is an amazing shot, the group is ready to get on with the real hunting. Having found an ideal spot they use a whistle that sounds like a wounded bird to summon the hogs who come charging at a terrific speed. Unfortunately they come charging right at Wayne’s leg and shatter his knee, leaving him unable to move. To distract them from this sad turn of events they discover a field of weed where Jake and Ricky start stuffing the goods into black bags. Unimpressed by this John and Ricky get into a heated argument that ends with Ben shooting Ricky. Jake then runs off to get the rest of his clan and exact his revenge while John, Ben and Quincy run back to get Brooks and Wayne and try to make their escape. 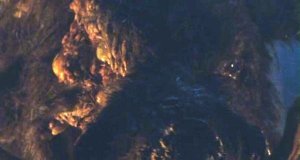 Unfortunately the pig was too stingy to go to the doctor and have his eye checked...

It’s at this point that things take a turn for the worst. Having summoned the clan to go out and avenge the death of Ricky the group needs to decide on what the best course of action is to take. Wayne’s disappeared and John, an ex-soldier who recently served in Iraq, is unwilling to leave his friend behind to face either red necks or killer pork products. John and Brooks decide that they will try to find Wayne while Ben and Quincy try to make it back to the house fast enough to get the car and try to reach help before the clan reaches them. Of course the house is the first place the clan thinks to visit and they manage to catch Ben and Quincy just as they are trying to leave. While the two of them try to make their escape John and Brooks seem to be having a little more luck when they come across the hippie they met at the very beginning of the movie who offers to take them back to his commune for safety. After all, how much harm could one muscular black man with a machete and a harem of stoned, gorgeous females do?

The pig will eventually make his main appearance towards the end and when he does he’s quite a sight to behold. If you’re in the mood for a movie that is just gory enough to be entertaining and just intelligent enough to make you think about what’s going on then I definitely recommend Pig Hunt.