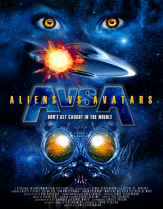 Just thinking about this movie again makes me giggle. It was either a very entertaining hour and a half or the worst thing I’ve ever seen, I can’t quite decide. The best way to imagine this movie, I feel, is that had it been made in the 1950s it would have probably been an incredible creature feature. That may be what gives it a little bit of its charm. It has absolutely everything you could want from a b-movie: Aliens with Predator-like cloaking abilities, reverse Avatars, special effects that are right up there with the likes of Birdemic and a very 80s Casio soundtrack. All these wonderful things, wrapped up in a cacoon of blue candyfloss. Definitely not for the inexperienced b-movie viewer, but I’d give it a recommend to the more seasoned amongst us; if nothing else it’s one hell of an experience. It’s also the only movie I’ve watched during End of the World Month to score anything on the Breast-O-Meter.

Finally, a spaceship that runs entirely on old Atari hardware.

Earth is under siege! Unbeknownst to all of us our forests are slowly being invaded by an alien race known as the Scythe (that’s Scythe with a hard ‘c’). Thankfully a strange race of pink-haired blue people are flying around the universe doing their utmost best to protect all the other little species out there. Earth falls within Ava’s sphere of protection, but unfortunately the robot she tried to send down that usually takes care of the hard ‘c’ed Scythe has malfunctioned. The lesson in all this? Never send a robot in to do a knock off James Cameron extraterrestrial’s job. The reason the robots are sent in is because they are designed to see through the Scythe’s cloaking abilities rather than Ava having to fumble around with her arms out in front of her. What ever will she do now?

Irrefutable proof that alien life is far from sexy.

We’ll get to that in a minute, because before the Earth can be invaded and we as the audience can take it all seriously there needs to be a group of people in danger that Ava has to save. Enter our team of stereotypes: Jock, Jock’s Friend with Benefits, Rebel Girl, Nerdy Virgin Guy, Nerdy Asian Girl and Slut. This lot’ve been friends since they were knee-high to a grasshopper and are heading out to a camping spot that they’ve been going to since high school. OK, nobody’s really friends with Slut, but Jock’s hoping that she can pop Nerdy Virgin Guy’s cherry. It’s understandable why nobody really likes her: while not only a bitch she is entirely impractical and thinks that wearing a pair of hooker heals is perfectly alright for taking a hike through the woods. With the Scythe nearby and looking for blood, of course, poor choice in footwear will soon be the least of the group’s problems.

You just know there’s a Power Ranger steering this thing.

So, with a malfunctioning robot and an alien on the loose, Ava must come down to Earth and save us all from the horror. Being an alien and unable to breathe in  Earth’s atmosphere Ava will actually stay in her ship and send down a human avatar imbued with her life force to do the job. When she meets up with the group of hikers they’re a little bit wary of the leather-clad female with Ke$ha-like autotune for a voice but after a little story and nearly killing one of them they’re all ready to jump on board and do their bit to save the world. They need to find where the Robotar’s (the robot that’s going to protect the world) pod landed so that they can go and fix it. Trust will become an issue since the Scythe can shape shift into anyone whose DNA it has come into contact with and there’s the small issue of humanity being a hopelessly technologically backwards species. Can the group come together to power up the machine and save the world or is Earth doomed to becoming a plastic alien’s new breeding ground?

Critiquing a rip-off movie made by The Asylum is a little bit like picking on the village idiot but I would like to start off by saying that there was some method to my madness. Not being a fan of either the Alien or Predator franchises I never took the time to watch either of the Alien VS Predator movies, so my logic behind watching Alien VS Hunter was that I could go into it with a clear mind and not be constantly comparing it to movies that had access to a budget and real actors. Sadly this decision was misguided as I sat, constantly confused, for 85 minutes desperately trying to figure out what was going on.

We start off on a very yellow morning (everything in this movie is tinted yellow for reasons unknown) with Lee Custler, a journalist, out jogging in the middle of a deserted highway. Lee is so engrossed with his jogging that he doesn’t notice a comet burning through the atmosphere and crashing into a nearby hill. Sheriff Joel Armstrong, however, has seen the comet and picks up Lee by bribing him with doughnuts so that the two of them can go and investigate the crash. After driving in the complete opposite direction to the crash site but somehow landing up at it anyway they realise that the meteor isn’t a meteor at all but rather the remains of an alien spaceship. Said alien quickly emerges from the spacecraft and ‘eats’ the sheriff (i.e. wiggles its head over his chest while fake blood oozes from his pocket). Sometime when all of this is happening a girl named Tammy, whose mother is missing, finds Lee and the two run off to go look for help.

When Aliens, Predators and spiders interbreed

Help, sadly, is hard to find in a town with a population of 11 people. At a little café / police station we are introduced to Hilary, Javier, Figgus and Marcy who, unsurprisingly, do not believe that giant spider-aliens are running around in the woods. Being from a small town and not having much else to do they decide to go off with Lee and Tammy anyway to look for the survivors of a car crash that Lee and Tammy saw when the alien attacked. The group finds a man named Garrison who survived the crash but Marcy lands up being killed because the alien can climb trees and what follows is a ridiculously long run through the woods as the survivors attempt to find anyone else who might be able to help them.

A forgotten Mortal Kombat character with a gun

Now somewhere along the line, and he really just appears out of nowhere, we are introduced to the second main character in our movie’s title: the Hunter. To anyone who’s played Mortal Kombat the hunter really just looks like a rejected form of Raiden with a red jar on his face and a big gun. For unknown reasons once again the hunter and the alien are out to get one another while our little gang, now joined by a normal hunter named Valentine and his daughter Freckles, constantly manage to get in their way. To be fair they can’t really run away all that well because the sets are too small to allow for it and all that really happens is they run in circles while the cameraman tries to get different angle shots to create the illusion of a bigger set.

The rest of the movie is mainly made up of the survivors either running (slowly, EVER SO SLOWLY) through the woods, the sewers, the water pipes, the hunter’s spaceship, the alien’s spaceship (it may be one ship, I’m not sure), several failed attempts at sub-plots that have nothing to do with the movie and dialogue that is in no way cohesive. The effects are terrible, the actors can’t act, an escaped chimp from a USA government lab could have written a better script and the attempt at a twist in the ending will make you want to throw yourself and your TV out the window. For all these reasons I have decided to place Alien VS Hunter in the ‘Requires Post-Film Lobotomy’ level of awful. In fact, having seen this mind-numbing piece of cheese, I’m not sure if Arachnia or even Terror Toons deserve such a rating.