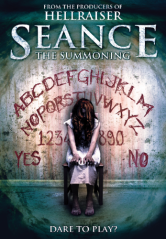 First off, I’d like to apologise for my recent silence and lack of reviews. I’m in a mad, desperate rush to submit my MA dissertation before the end of the year, and my guess is that it’s gonna get a whole lot worse before it gets better, but I’m gonna try to update things as often as possible. All work and no play makes James a dull boy, after all 😉

Anyways, what to say about Seance: The Summoning. In all the years I’ve been watching shitty horror I’ve never come across a movie quite like this one. To say that it was a rollercoaster to watch is an understatement, and at no point did I ever know how to feel about what I was watching. It’s either one of the most bigoted movies against Christianity ever made, or it’s one of the greatest pieces of Christian propaganda that’s not so cleverly masquerading as a horror movie. At points it’s painful to watch, other times it’s a fun b-movie, and there are also times when you feel it’s pulling itself together nicely. The actors seemed to learn how to act as they went along, so on that front it starts painfully and ends somewhere that’s slightly above average. On the whole I really just don’t know how to feel, but for putting me through so many ups and downs I declare it to be a High Level of Awful. Take that movie crew et al.!

OK, who forgot to pack the malevolent spirit?

Sara is a delightful born again Christian girl who just wants to make the world a better place through Christ’s love. To do this, she’s going to help her friend Eva out with a seance. Because Jesus wants you to summon up the spirits of the damned. Eva comes from a long line of psychic mediums who have perfected their craft over the generations. Her grandmother was burned as a witch by the Catholic Church, but those were less tolerant times and you make do with the hand you’ve been dealt. While the two girlfriends are sitting in a park chatting about life Eva decides to give Sara a tarot card reading. What follows is the most vague and subjective insight into the nether realms you’ve ever heard, but it serves to inform us that, before being reborn, Sara was a very, VERY bad girl. Not that that should come back to haunt her or anything later on…

The girls meet up with Joey and Marcus in the park, whereupon they hatch this ingenious plan: they’ll drive a hearse to the morgue for uncollected bodies (hobos, druggies, prostitutes etc., so you know these are some angry spirits) and hold a seance after they’ve inspected the corpse freezer. Joey, in addition to being a security guard at said morgue, is busy doing his unspecified degree in something paranormal and wants to record Eva contacting the dead. Marcus is a stone cold atheist and is only tagging along because a) he wants to bang Lisa and b) if Eva can’t summon up a spirit, she has to dance in a bikini at all of his DJ gigs for a specified amount of time that I can’t quite recall. I reiterate: awesome plan guys!

Now you might experience a slight sensation of extreme agony…

Now, as every reasonable person knows, it’s never a party until someone goes home devastated. In the process of summoning the dead it comes out that Marcus isn’t so much an atheist as he is a closeted psychic. It explains so much really. With the secret out and his friends telling him that it’s OK, that they don’t care if he’s interested in talking to the dead, and that there’s nothing to be ashamed of because he was born that way, the resident evil spirit (see what I did there?) sees a soft target and possesses him. Armed with the powers of hell and an ability to roll his ‘r’s with such power it would intimidate the most hardened latino, Marcus is intent on controlling the whole world. It’ll be up to Eva and Sara to use a concoction of psychic power and Christianity (and a little rubber tubing) to banish this evil back to the hole it crawled out of.

BUY SEANCE: THE SUMMONING AT AMAZON.COM 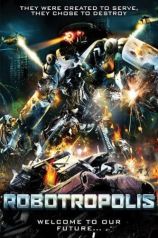 As any of you who follow me on Twitter may know I’ve been suffering from a terrible craving for a cheesy sci-fi movie lately. Many people suggested Galaxy of Terror, but I couldn’t wait for my copy to arrive (I promise to watch it soon). When I came across Robotropolis I was immediately captivated by its cover with an almost toy-like android and decided to take a chance on it. With below average acting, a wafer thin plot and CGI that lies somewhere between The Asylum and SyFy Originals you really can’t go wrong with this movie. Robotropolis is a b-movie at its finest that’s daft enough to be a very enjoyable 80 minutes but not painful enough that you’d want to wash your brain off with bleach afterwards. It also does gooey body parts remarkably well.

You are watching GNN and reporting live from New Town in the south China Sea is star reporter Christiane Nouveau. New Town is a bustling new city on an island owned solely by MegaNational Industries and this is the first time reporters are being allowed in to film and document the amazing technological developments going on here. While New Town has been built up around an enormous oil refinery the main thing the teams of scientists and groups of cheap labour have managed to accomplish is the development of robots to help out with all the different kinds of labour we humans just don’t feel like doing. This can range from manual labour to raising our children. Of course, what can possibly go wrong when we place our safety and future in the mechanical hands of humanoid constructs incapable of experiencing an emotion?

Christiane has been absolutely enthralled with the robots up until this point, thanks in no small part to the fact that they know how to mix a decent cocktail. This opinion and perception changes a little, however, when she’s reporting on a little soccer game where one of the players is a robot. At one point, and seemingly unprovoked, the robot decides to shoot one of the players. After that the robot simply walks off, leaving everyone else utterly baffled as to what just happened. Since the only way to differentiate the robots from one another is by the printing on it that designates their job, it’s gonna be very difficult to find that one particular robot in this big city. Before a decent search can get underway reports start to stream in about robots attacking people. The problem here is the fact that the entire security force is comprised of robots as well…

I would like to raise the point that, despite the failure of the programmers to stop the robots from going on a blood thirsty rampage in the first place, the robots come with a more serious design flaw. These robots are meant to fulfill basic functions in society such as police, medics, construction workers and the like. Why then do all the robots come with built-in guns, drills, saws and flamethrowers? While this does make the killing spree much easier (and juicier) it would appear that the robots are a little over armed in my humble opinion. While trying to escape from the robots Christiane’s also going to try and keep reporting the news so that her boyfriend can earn himself a nice big pay cheque by dominating the 5pm news. After all, being in a relationship means having to make sacrifices. When the robots learn how to throw helicopters around and leave the humans with no way of getting off the island it’s up to Christiane and the two or three surviving tech junkies to devise a plan to bring the robots down and have them permanently decommissioned. 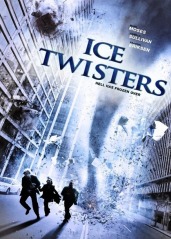 This movie and Arctic Blast (I’m pretty sure that Arctic Blast is this movie’s spiritual sequel) raise the question of who thought that playing with the atmosphere to create doomsday-scenario movies was a good idea. Neither movie is horrendously bad, but the flip side of the coin is that neither one is particularly good. All the same it is End of the World Month and, if you’re a particularly cold-hearted individual, there can be a strange attraction to seeing the world being both destroyed and frozen over in a matter of moments. 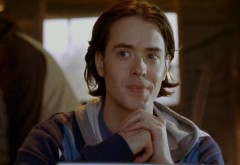 You just know this man has boobs on his mind.

One thing that’s beginning to emerge more and more as this experiment progresses is that the road to hell is paved with scientists with good intentions. Joanne is a lovely woman who has been deeply affected by the plight of people in areas plagued by drought and famine. Apparently Kansas and Ethiopia are on par with one another so far as these things go, which I’m not so sure of, but her intentions are good. Along with her colleague Damon Joanne has devised a revolutionary new technology that not only seeds clouds to make it rain but that will actually make the clouds in areas where there isn’t enough moisture for natural cloud formation. Now I can assure you that watching this pan out on-screen is about as thrilling as watching paint dry in slow motion but is apparently necessary if we’re to appreciate how this team of rag-tag scientists is going to save the world from their own creation.

Madonna warned him of the dangers of his heart not being open.

The other thing that has become overly apparent throughout the course of Earth’s multiple ends is that groups of scientists should never be allowed free reign of any experiment. Nobody ever foresees the inevitably destructive outcome that their actions will have. Thankfully our brave audience has Charlie Price to fall back on. Charlie was once one of the world’s most recognised and respected scientists before he was forced out of the community for unmentioned reasons to pursue an exciting career writing trashy sci-fi novels about how the world will end through a number of man-made and natural disasters. In this world of enormous coincidences Charlie just happened to be holding a book signing in Generic Small Town, USA where Joanne was conducting her experiments. One moment the sun was shining and everyone was happy and the next thing you know buses and cars and all manner of debris are flying around in a very darkened sky.

In today's weather there's a 80% chance of all hell breaking loose.

And the coincidences just keep on coming! Joanne, obviously aware of the fact that a small town’s near annihilation was not in the original test plan, goes to investigate the damage. She runs into Charlie and it’s revealed that they’ve known each other for donkey’s years. Charlie, using a little blackmail, convinces Joanne and Damon to take him along on their investigation to see what’s going on and how they can go about stopping it. Within a matter of moments Charlie has a theory as to what’s going on: the little machines flying around creating the clouds are doing so by draining the area of any moisture to form the clouds. As a result freezing cold air from the upper areas of the atmosphere are feeding down the way and creating the freezing tornadoes. This of course flies in the face of all scientific reasoning and no one’s prepared to believe him. Hopefully, through the use of a number of horrible analogies from his various novels, Charlie will be able to convince everyone that his plan is the best one and the only chance that humanity has to avoid becoming frozen popsicles.