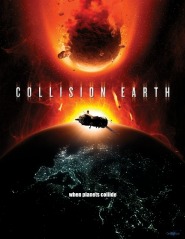 So, it had been a while since I last watched a good, old-fashioned end of the world movie. Since I promised the people at Syfy that I’d watch one of their movies to thank them for the upcoming Aladdin and the Death Lamp and Pegasus VS Chimera (a Tweet to which I got no response 😦 ), I decided to take a shot on Collision Earth. The result? WOW! Just WOW! I love me some questionable science in a disaster movie, but this little baby took it to hitherto unknown levels. I will try my best to demonstrate the lunacy that was this movie throughout my review, but should you ever feel the need to watch the most horrifying attempts at astronomy in a movie at some point in the future, make sure you have a copy of this on stand by for when the moment takes you.

Not good! Not good!

The year is 2011 and mankind is about to take its first steps on the planet Mercury. Why Mercury of all planets remained a mystery to me since it’s not really anything other than a hot Moon, but I decided to run with it and see where the movie wanted to take me. Onboard the spaceship are three people: Veronica, a jack-of-all-space-trades and master of the universe, and two people who don’t matter cause they die relatively early on. These three will never have the honour of being the first humans on Mercury because, just as they arrive at the planet, the Sun sends out a giant solar flare that blasts the ship and the smallest planet in the solar system. This blast leaves the Asian contingent of the space mission dead and the ship in a bit of a bruised state, but that’s gonna be the least of their worries in a minute.

Tractor flipping of the gods!

You see, it wasn’t actually a solar flare. For a very brief second the Sun transformed from a normal star into a magnetar. The flare was actually a burst of magnetic radiation that not only knocked Mercury out of its orbit, but also magnetised the entire planet. Since Earth has a strong magnetic field, it begins to draw Mercury towards it, setting us up for a series of catastrophic and preposterous events. Now, to digress for a moment, I would like to address the moment when people realise that Mercury is on the move. Rogue astronomer James, upon noticing that Mercury isn’t where it was a few hours ago, shouts out “A planet doesn’t just move”.

We can confirm that we have some sciencey stuff going on here, sir.

Upon hearing this I actually paused the movie to fight with the TV. Why? Because planets do move, and they move in a number of different ways. They’re rotating on their own axes all the time. While they’re doing that they’re rotating around the sun. The gods were merciful by not placing us in a binary star system, because I don’t think I’d have the energy to school the movie on how that works as well. I never thought I’d live to see the day where I heard dialogue like that, but here we are. Now that I’ve gotten that off my chest, as you can well imagine, the government is in no way capable of protecting us from Mercury’s collision, and it will fall to James to find a way to save us all. He will be aided by two college students with a pirate radio capable of sending messages to Mercury, an agoraphobic and socially awkward scientist side-kick, his wife, who is busy flying around Mercury, and a weaponised asteroid built for just such an occassion. Interspersed amongst all of these characters will be even more scientific fallacies, some jaw-dropping CG and some recycled footage from Ice Twisters. Enjoy!