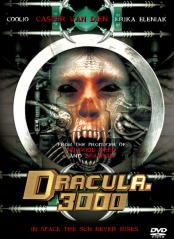 Holy sweet mother of God my brain… I’m not much of a vampire fan, my preference has always been with zombies. None of this intelligence nonsense, just eat the damn human and be done with it. I’m sure I’m not the only one with this prejudice, which is why Dracula 3000 is actually quite heart warming: a vampire movie that was clearly made by a horde of mindless zombies. This isn’t so much a movie as it is 86 minutes worth of shots of a storage / boiler room with various morons running around in it. If they were going for a Jason X kind of vibe they missed the mark horribly. I honestly cannot think of a single person I would recommend this movie to. If you are unfortunate enough to come across it expose it to sunlight (or a blowtorch) and wait until it melts.

In the year 2950 the spaceship Demeter was just cruising through the universe when it ran into a spot of bother. After picking up some cargo the ship’s crew all became mysteriously ill and the captain began to lose control of the ship as all the guidance systems began to fail and the engines failed to fire. I’m sure the captain’s wife had very similar complaints, but that’s a story for another day. When the ship’s emergency distress signals would no longer go out the Demeter became lost in space for the next 50 years. In the year 3000 Captain Abraham van Helsing and his ship, the Mother III, are also cruising through the universe and just happen to stumble upon the Demeter. Given the size of the universe the fact that you would stumble across anything at all is quite remarkable, but here we are.  Claiming salvage rights on the Demeter van Helsing and his crew board the stricken star liner to see what happened to it and just how much they can make off with. 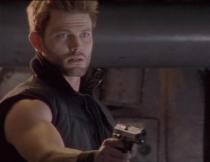 Casper van Dien is tired of your shit!

Accompanying van Helsing is the most useless crew space ever has or ever will see. Aurora is the token blonde who’s an uncomfortable cross between radical feminist and sex kitten. Mina is the whiny female intern that tries to do stuff but can only accomplish things with the help of men. Our on board professor is a cripple who actually seems to know very little about anything other than whining and hiding under things. Then we have our two stock black characters: the pot head, 187, and the take-no-shit-and-kick-your-puny-white-ass Humvee. Points must be given for their collective intelligence: as soon as they discover the very first rotten corpse tied to a chair with a crucifix in its hand they have this sneaky suspicion that something may have gone wrong on the ship. Van Helsing’s the loose bolt in the fine machine that is the collective intelligence of the crew since he’s not going to let one little rotten corpse and rooms littered with crucifixes frighten him off from collecting a little scrap metal. He’s far too manly for that kind of thing.

Stabbed through the heart, and you’re to blame. You give love a bad name.

So what could have possibly happened to the Demeter? Well, you see, what happened goes a little something like this: while cruising through the galaxy the ship received a transmission from the planet Transylvania in the Carpathian star system. No I’m not making a joke, that’s really where they were. Since none of this set off any alarm bells the Demeter’s captain obviously wasn’t going to question why he was transporting over a dozen coffins through space towards Earth. Turns out that Transylvania is a vampire planet (gasp, shock, horror) and Count Orlock, the head vampire, wants to be taken to Earth for a little snack. Oh, if only now, 50 years later, there coincidentally happened to be the descendant of some of the best vampire hunters in history on board the Demeter! If such a hero were here then perhaps he could save the day and defeat the evil Count? Even if he had to do so while being surrounded by useless professors, whiny women and stereotyped black men. To be fair I didn’t see the ending coming. The flip side of that coin, however, is that the ending is awful and makes you want to throw a brick through the TV. You have all been warned.

I did this guest review a while back while 1987 month was still in full swing and I didn’t want to disturb the disturbing flow 🙂 Never too late to read up on this little gem though – head on over to Horror Daily and then hang around to read his reviews of some other little gems floating around out there!

Oh dear. Words escape me a little with this one. When I reviewed Dead Clowns I made a point of emphasising how slow-paced the movie was because of a lack of story. Well here we are, another movie about a killer clown, but this time it’s long and has far too much story. Not that most of the story actually ties in with what’s happening, but it’s there none the less. The sad thing with this little piece of cheese is that, had it been done properly with actors who could act, it would probably have been quite frightening. Sadly this was not to be and instead we are left with this attempt at frightening and suspenseful that lands up being confusing and a little boring but delightfully cheesy anyway.

PSA: Shivers the Clown encourages you to switch to energy saving light bulbs.

Lynn Blodgett is an up-and-coming artist in Baltimore that has developed a reputation for her pictures that depict the darker side of clowns. A series of flash backs tell us that she has had some traumatic experience with a clown as a child, but the movie doesn’t seem interested in explaining this, and has subsequently developed a severe case of coulrophobia which serves as the inspiration behind her paintings (according to the plot synopsis – movie doesn’t really make this clear either). This fear may also tie in with the trip to the abandoned amusement park that she makes later in the movie (movie doesn’t explain this either). Anyways Lynn has an art exhibition opening at the local Craig Flinner Gallery but, on the day before it starts, the neighbours of the house she’s looking after are murdered by a rather muscular and shirtless clown (apparently based on one of her paintings, according to the plot synopsis, but there are no paintings of him until she does one after seeing him). Lynn does not seem perturbed by this and continues with her plans for her exhibition where she meets Tucker, a roller coaster designer who pays $ 8000 for one of her paintings. Now there seems to be an uncut and longer edition of this movie that I don’t have because one moment Lynn and Tucker are at his office and the next she’s at home telling one of her friends on the phone about the how the evening was one ‘long story’ and she seems a little distressed. Perhaps the longer version would have filled in the blanks. While she’s on the phone Shivers the Clown appears at her door and frightens her so much that she passes out.

Why bother showering if all you're gonna do is get killed?

Where this movie does stand out amongst all of the others that I’ve reviewed is that the amount of time you spend looking at a half-naked man as apposed to a completely naked woman is greatly above the horror movie average: there is only one naked woman in the whole movie and absolutely no sexual content while Shivers is shirtless throughout. Now while our half-naked clown is out murdering people our plot line becomes more involved and confusing when Lynn discovers that her husband that she is divorcing has been out of work for six months and she is later commissioned to do the portrait of a man’s father for $ 20 000. She is conflicted, however, because it turns out that the man’s father was a convicted child molester that got off of some of the charges when there was insufficient evidence against him (I’m not sure how he’s a convicted criminal if this is the case). Absolutely NONE of this, however, has anything to do with the rest of the story and serves as a rare case where a movie creates plot holes for itself where none would have existed if they had been left out.

As the story plods along and several of Lynn’s friends are killed the police eventually decide to take her seriously when she tells them that a killer clown is after her. The plot continues to become more complicated when it is revealed that her soon-to-be-ex-husband is trying to have her killed (ironically, by having a man dressed as a clown break into her home and shoot her). Somehow the husband also seems to know Shivers and even visits him and, although this does kind of tie into the story, it again serves as even more plot-filler. Eventually, as Lynn and Tucker become closer (despite the implication that he’s actually stalking her – something else that the movie doesn’t care to elaborate on) and the killings get closer and closer to home the two of them must put on a united front in a locked movie theater in order to avoid landing up like Lynn’s friends and being left in pieces all over the lounge floor.

I would like to give the movie credit, however, for the single little shot of a policeman guarding Lynn’s house and reading a copy of Stephen King’s It. It’s just a pity that nobody cared to actually read it and see how a killer clown storyline is done properly.