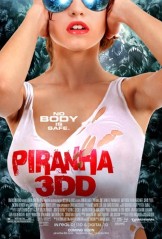 Let me start off this review by stating the obvious: aaaaaaaahhhhh!!!!! I’m a great fan of the Piranha movies. I liked them when they were eating people in the 70s, I liked them when they learned to fly in the 80s, and I even thought that Piranha 3D was a lot of fun. This was not fun. Not even having Tropical Mary to watch it with me could undo the damage that this movie inflicts on a person. Made to cater to the absolute lowest common denominator, Piranha 3DD takes all the things that should make it fun (boobs, a water park and thousands of ferocious man-eating fish) and somehow manages to make it both horribly painful and tremendously boring to watch. If you’re a really randy 14-year-old boy who hasn’t quite figured out how internet porn works yet, then this is probably the movie for you. Anyone else, steer the hell away from this one.

A whole year has passed since the tragic events at Lake Victoria. The lake has had every conceivable poison dumped into it to eradicate its piranha population and the whole area has been declared a disaster zone. Captain Obvious’ wife does a little voice over work as a news caster reporting on the incident, asking the audience that if this tragedy could happen here, could it happen somewhere else? It’s as though God himself heard this question and, to spite us little mortals, takes us to another lake where two farmers are trying to drag the corpse of a cow out of the water. The corpse is littered with piranha eggs falling out of every possible orifice and these are released when the farmers accidentally blow up the corpse. After a quick snack on the farmers the piranhas begin their journey to discover a new source of food.

Taking the concept of getting down on your knees for Jesus to a whole other level.

Spending time watching farmers and dead cows, of course, leaves us dangerously without gratuitous shots of naked females, something that this movie simply will not stand for, so we are now taken to a water park called Big Wet. Big Wet is owned by a man named Chet who plans to fill the park with water certified strippers and a gated-off adult swimming pool mainly aimed at those wanting to participate in a quick orgy. Maddy, Chet’s stepdaughter, isn’t overly taken by this idea, but she’s not the majority shareholder in the park so she just has to shut the hell up. When two of her friends mysteriously disappear and she herself is attacked by a group of piranhas in a nearby lake she takes it upon herself to find out what the chances of them rocking up at the water park are. We’re told something about sulphur dioxide in the lakes and the chlorine in the pools and suddenly it’s obvious where the fish will be heading next.

This speaks for itself.

Of course the chlorine in the pool is the least of their worries when it becomes apparent that Chet has discovered a better way to fill the pools in the park. Why pay for water when you can drain an underground lake? Maddy points out the obvious piranha problem that these underground lakes have, for which she is forcibly dragged away by her policeman ex-boyfriend who’s been taking bribes from Chet. After some poor homages to A Nightmare on Elm Street and Planet Terror, as well as a piranha eating a man’s penis, the park is suddenly inundated with these little fuckers. David Hasselhoff proves to be of little use in fighting the fish off, and the only thing that temporarily slows the little buggers down are the drains in the pool (which appear to be more powerful than the vacuum in outer space). By this point it all becomes such a confusing mess you couldn’t give two shits who makes it and who doesn’t; you’re just so busy praying to the heavens above that the end credits will roll soon.