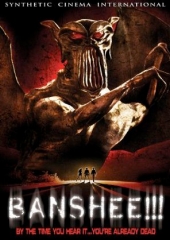 In the great big world of b-grade horror, with so many titles vying for my attention, a movie needs to do a little something to catch my eye and make me want to see it. The three exclamation marks in this one’s title were enough to do it for me, and after the crushing disappointment that was Kinky Killers I was ready for something that would tickle my funny bone a little. This one came very close to being funny, but was ultimately let down by the fact that the actors appear to have been picked up at the local bus station and given 5 minutes to remember their lines. By the time this reality fully drove itself home I was already about 20 minutes in, so I figured I might as well finish watching it.

The Un-Virgin Mary appears from the mist…

You need all this to fix a radio?

In the year 2008 the shallow puddle of water has since evaporated, leaving the old car exposed. Jack Gorman, with the help of two buddies, his dog and some industrial building machinery, manages to drag the old car out for reasons vaguely alluded to. In the car’s boot he discovers a very strange, squishy object that (to the trained monster movie eye) resembles a kind of cocoon. He thinks nothing about it, and heads on home for dinner. Elsewhere in the forest a group of young college creatures has just arrived to celebrate Spring Break. Veronica, our blonde and chinless heroine, wants to get together with all her old friends to rekindle the interest they once had in one another. Whilst it was hard to imagine anyone once having an interest in any member of this group, I decided to suspend disbelief and see where the movie wanted to take me.

Just to clear up any confusion anyone may be experiencing, the cocoon from earlier had a banshee (!!!) in it and now it’s running around the woods. The kids find this out relatively early into their camping trip when one of them gets a branch rammed through their face. Jack and his nephew Rocker have been having a stand-off with the creature for a few days, but it’s making quick work of anyone else who just happens to be wandering through the woods. Its scream isn’t only debilitating but, if you’re exposed to it for long enough, your head will explode. When the surviving kids manage to find Jack’s house they all need to band together to fend off the banshee (!!!) or land up being ripped limb from limb and drained of blood. Personally, in a toss-up between the dismemberment and watching this movie again, I’m still in two minds about which one I’d go for.