No 1987-themed month would be complete without throwing in a little post-apocalyptic sci-fi gem and I think the devil himself might have sent this one up just to play with me a little. Thankfully Satan and I can have a good laugh about these things so when he tripled dared me to watch Creepozoids starring Linnea Quigley I told him it was on! And so I sat for 70 or so minutes with highly processed butter-flavoured popcorn at the ready and watched with great amusement as this little movie tried to limp itself along to a place called ‘something half-decent’. Sadly it never quite made it to its destination and all that remains is the rotting corpse of half-a-dozen people’s acting careers.

If you need this explained to you, you shouldn't be reading my blog.

The year is 1998 and, in the wise words of Crow T Robot, we’re trapped in our old future. 6 years have passed since the outbreak of World War III and planet Earth is in a very sorry state indeed. Playing on what I imagine must have been the fears surrounding the USSR the Super Powers of the world have declared all-out nuclear warfare, devastating the planet and leaving enormous parts of it completely uninhabitable. Apart from the obvious problems like trying to secure a reliable food source most parts of the world are now being ravaged by highly caustic acid rain that destroys absolutely everything it comes into contact with. To keep the war going the US, whose centre of government is New Los Angeles (no word on what happened to the old one), simply drafts people into the army and sends them to the frontline. Those unwilling to fight are lined up and shot. This is kind of where the storyline takes off and we are introduced to 5 military deserters making their way through a ruined city of some sort. They need to stay low to ensure that nobody catches them but, unfortunately, they find themselves right in the path of a rather nasty acid storm, whereupon they seek shelter in one of the many abandoned buildings around them. While they are hopelessly trapped in there until the storm passes they seem to have been in a little luck as the place is quite well kitted out with all of the essentials: food, clothing, bedding, electricity and, most importantly, a two-man shower (see photo). To begin with everything seems to be absolutely perfect but, as is always the case in a b-grade movie, this building holds a very dark secret of its own down in its cave of a basement. 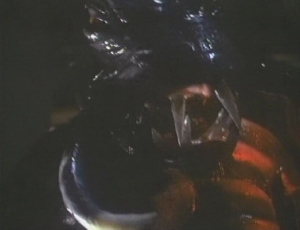 Cujo and the Hulk should never have had that one-night stand...

As it turns out the reason this building is so well kitted out is because it used to be a military seat of operation where they were carrying out some experiments that may not have been entirely ethical. In an attempt to make the ultimate soldier the scientists based here were trying to make it so that their human guinea pigs could synthesise their own amino acids, meaning that the soldiers would no longer be reliant on a food source because they could make everything they needed in their own bodies. The side effect of this little experiment is a hideously deformed and violently territorial creature living in the basement who occasionally pops up through the air conditioning ducts to attack someone with its enormous mandibles and razor-sharp, see-through teeth. It doesn’t necessarily seem to want to kill anyone but rather inject them with the same serum it was. It would appear, however, that second-hand monster serum has some troubling side effects of its own and anyone infected starts to blow up like a balloon and ooze blood and bile from everywhere. In a toss-up between that fate or being slowly melted by the acid rain our intrepid little band of deserters needs to find a way to kill the beast before finding the password to the highly advanced computer system and playing a game of Pong.

This movie was shot in 15 days in an abandoned warehouse on a budget of $150 000. Now by 1987 standards that’s not necessarily bad money, but then make a slasher. This movie needed special effects, not some guy in a plastic bug suit and harness suspended from the roof (58 minutes in – take a look).